The Hurricanes also travel to Lyford Cay International School for 'Football Fest' in Lyford Cay, Bahamas. This is a middle school soccer tournament and is always a fantastic experience for our young athletes. Last year AISK finished as the top visiting team. This year The Hurricanes are not settling for the semi-final! The Soccer program at AISK has really taken off; the players are focused and dedicated to succeed.

Later in the academic year our High School Basketball Team travel to Cayman International School for 'The Blue Iguana Jamboree'. This is another enriching experience and last year against international schools we finished second. This year we have already started training and intend to finish top of the table. Our basketball program is relatively young but the buzz for it means we are confident of competing both locally and in CISA events (Caribbean International School Association).

The Fifth Annual KPMG Football Fest was held November 4 & 5 in Lyford Cay, Bahamas.  The event brings together nearly 100 student athletes from four different Caribbean countries, including The Bahamas, the British Virgin Islands, the Cayman Islands and Jamaica, for two days of competitive sport, fun and cultural exchange.  AISK students have participated in all five annual events. 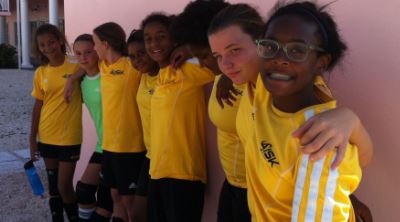 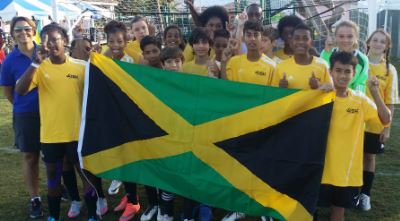 For the third year in a row, the AISK Hurricanes travelled to the Cayman for the Blue Iguana International Jamboree Basketball Tournament. Each year the quality of the teams have improved providing a challenge for all teams involved.

The Hurricanes started with some tournament jitters, but were able to hold on for the win against Cayman Prep. Their second game was against last year’s (and the two years before that) champions, Wesleyan Christian Academy who won comfortably against our boys. They really are a force to be reckoned with.

Our win meant we qualified for the championship tournament on day 2 where we met Wesleyan once again. Here, they further demonstrated their class, but our boys did not back down. They showed their quality and there were excellent segments of play where Wesleyan were unable to prevent the hurricanes from scoring. Wesleyan went on to play Triple C (Cayman Christian College) in an exciting final that saw Wesleyan victors for the 4th consecutive year.

The loss meant that we were now competing for 3rd place with the likes of Cayman International School (CIS), Cayman Prep and Lyford Cay- Bahamas (LCIS). We met Cayman Prep in the first game of the bracket and we showed our quality and skills to comfortably beat a team looking for revenge. This meant we had one more game to play (the fourth for the day). There was no time to rest as the game followed directly after our game against Cayman Prep. A strong willed team took the court against our friends and rivals LCIS to battle it out for 3rd place, the top international team.

The game was close but the hurricanes couldn’t get into a position of control/power the ball. A sharpshooter from LCIS sunk two 3 pointers leaving us with a with an uphill climb to the finish line. Tired legs unable, to press or pressure allowed LCIS to pull through by a five point margin, holding on to the 3rd place spot for the second year in a row. Leaving AISK as the 2nd highest placed international team.

The boys showed real grit, determination, drive and athleticism; as coaches we believed they deserved more. They did their coaches proud, AISK proud and most importantly they did themselves proud.

The Most Valuable Player (MVP) award for the whole tournament went to our very own Ryan Wilkinson. He stood out amongst all the talent on display as the most influential player in a single team. Congratulations Ryan!!

The teams behaviour on this basketball trip was impeccable, we were having positive feedback about all our students, and they built lasting bonds with competitors, students, teachers and host families from Cayman and the Bahamas.

A huge thank you to the Cayman International School for hosting and to the Hurricanes Basketball Team for making us all proud. These achievements happened because we stayed as a team from the beginning until the end. These team relationships and work brought us so far, next year we will be even better.